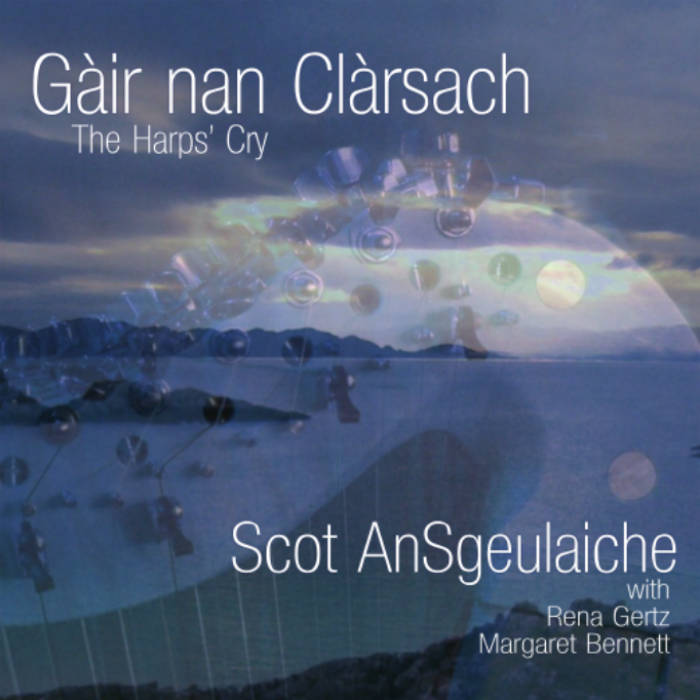 The harp tune, Lauren's Bourée, I wrote in 2001 for a piper I worked with, although I don't know that I ever gave her a copy.
The sung part is a 'waulking song', used to keep rhythm and enthusiasm when the women are working the tweed cloth on a board. Margaret Bennett, who is leading the 'workers' in this cèilidh recording, explains the origins: “It was on a snowy Oidhche Challainn in Newfoundland that I first heard Allan MacArthur singing the song. Òran nam Mogaisean (The Moccasin Song) was composed by Murdoch MacArthur in the Codroy Valley (they were originally from Canna and Moidart). I recorded Allan MacArthur with sons George, Martin and John in January 1970. Seated at the kitchen table, Allan had no sooner sung his first note than he and ‘the boys’ took hold of the tablecloth, thumping it vigorously on the table to keep time in their improvised milling. Allan told us that Murdoch and their generation knew the Mi’maq families whose skilled leatherwork they admired and they learned from them.”
The spoken text is from the Statutes of Iona 1609 in which King James VI banned my profession from the courts of chiefs to break the clans' collective memory. He also required the chief’s first born to be educated in the Lowlands. This led over the next two hundred years to the weakening of the bond between chief and clan leading to the highland clearances of the 1700s, displacing our people to places like Nova Scotia, Canada and Newfoundland. They carried their culture and a century later were still composing songs in the old way, like Òran nam Mogaisean, so we come full circle.

Although not all of the verses of the song were used in the present setting, they are quoted here in full because this song needs singing!
Seist:
Tha fonn, fonn, fonn air,
Tha fonn air na mogaisean,
Tha fonn gun bhith trom,
Hog i óair na mogaisean.

1. James Ryan got started/ With a piece of hide for the moccasins/ Although he tanned the ankle leather/ They weren’t yet soft enough.
2. When I go down to mass/ In the company of the lasses/ They can’t say a word of prayer/ For staring at my moccasins.
3. I got a piece of sheepskin/ To cut a strip from it/ I tossed it to one side / But found a calf-hide.
(Translation by Margaret Bennett, published in The Last Stronghold.)

With a foot in each camp of Science and Religion, Scot AnSgeulaiche combines Highland traditional music and Tale with electro-acoustic treatment. He is a Seanachaidh, or teller of Tales, from the west coast of Scotland.

Bandcamp Daily  your guide to the world of Bandcamp

Guests include Kassa Overall and Muriel Grossman, plus an LP of the week by Van Hunt.